Measurement is the process of assigning numbers to attributes. As a society, we take measurements of almost everything—weight, height, temperature, the speed our car is going, the amount of time using our phones, and the amount of money in our bank accounts are a few examples. For tangible, physical attributes, measurement is easy and straightforward—a number is arrived at. But have you ever considered how we have come to measure happiness, intelligence, or confidence? These traits are what psychometricians call latent variables, or variables that cannot be physically or directly measured. The ability to measure these variables accurately and reliably is the focus of the field of psychometrics. As the field of psychometrics developed, tools like Item Response Theory (IRT) and Classical Test Theory (CTT) have increased our ability to measure latent variables.

History and Development of Psychometrics

Francis Galton is considered the father (sometimes grandfather) of behavioral science (Clausen, 2007). In the late 1800s, Galton was one of the first people to begin measuring and investigating differences in human traits (Jones & Thissen, 2007). He primarily focused on measuring physical traits and took measurements of thousands of individuals’ characteristics. Eventually, he attempted to measure latent variables, which he viewed as mental traits. However, his major contributions include bringing statistical analysis to behavioral science. He was the first to use methods such as correlation (how related two variables are) and apply the normal distribution (a common, bell-shaped, symmetrical distribution, which a number of variables follow naturally) to understand the characteristics he measured and their relationships.

In the early 1900s, there was a shift to specifically testing intelligence. Two scientists, Alfred Binet and Theophile Simon began testing cognitive abilities. Their goal was to assign someone a “mental age” based on the results of a test (Jones & Thissen, 2007). Inspired by their work, Charles Spearman wrote the paper “‘General Intelligence’, Objectively Determined and Measured”, which some view as the beginning of modern-day psychometrics. Spearman (1904) took Binet and Simon’s research a step further by analyzing cognitive tests and assigning a general intelligence factor, which he designated as “g”. Within a few years, Lewis Terman also took Binet and Simon’s work and developed what we know today as the intelligence quotient score (IQ; Jones & Thissen, 2007).

Around the 1920s, psychometrics began to look like what we know today. This shift happened largely as Louis Thurstone began applying psychometrics to education. He wrote tests like the Psychological Examination for High School Graduates and College Freshmen. This test assigned two scores, one for linguistic skills and another for quantitative skills. He wrote other tests for many years, allowing him opportunities to develop different methods used today in the field of psychometrics. These methods include multiple factor analysis and test theory. He also brought to light the ideas of reliability and validity, emphasizing their importance in psychometric testing (Jones & Thissen, 2007). Although it took time, these methods and theories are the tools that psychometricians use today.

The “How” of Psychometrics

Currently, the two renowned tools of psychometrics are generalized to classical test theory (CTT) and item response theory (IRT). However, the field is more nuanced than that. Other methods are intertwined with CTT and IRT, such as generalizability theory and factor analysis, which we will explore here. However, understanding CTT and IRT first requires an understanding of psychometric fundamentals: building a model, reliability, and validity.

As previously mentioned, psychometrics studies the measurement of latent traits. Measuring the physically immeasurable can be done by assessing multiple related variables, called indicator variables, that can be objectively measured. Depending on the field of study, the composite of indicator variables is referred to as an instrument, model, scale, test, assessment, or questionnaire. Hence, we will use these terms interchangeably. To illustrate creating an instrument, we refer to a fictional instrument for measuring musicality that uses the following indicator variables: 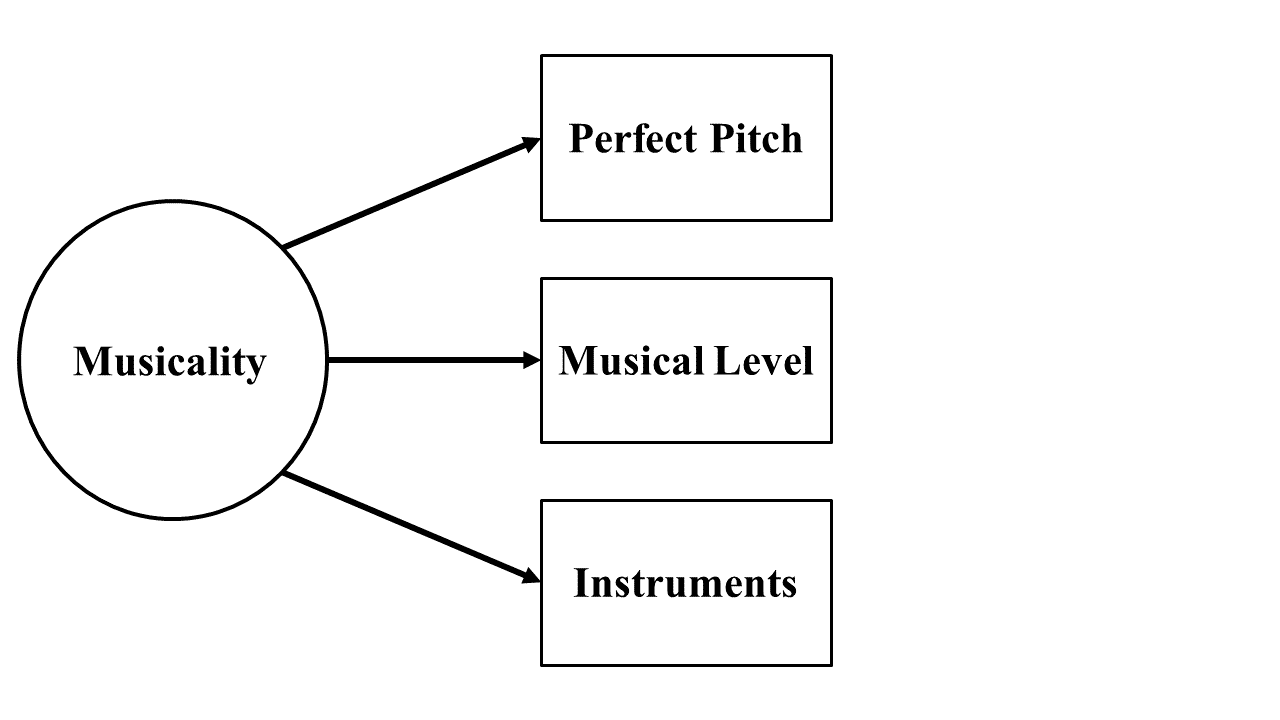 Reliability is a specific term in test theory that means the results are consistent. A respondent taking a reliable test multiple times would result in scores that are similar. Reliability can refer to different aspects, such as “consistency over a period of time, over different forms of the assessment, within the assessment itself, and over different raters” (Miller et al., 2013, p. 110). In this chapter, we focus on the internal consistency aspect, in which case, reliability is measured using correlation. Correlation is the assignment of a value, called the correlation coefficient, that measures the relationship between two variables.

The ideal calculation for reliability requires correlating two scores from the same respondent under the exact same conditions, including time. Since replicating conditions is implausible, we use estimations instead (Miller et al., 2013). For instance, a commonly-used estimation is Cronbach’s alpha coefficient, which comes from splitting the test in half, resulting in two tests taken under the same conditions. The scores of one half are then correlated with the scores of the other half. That process is then repeated for all possible test-half combinations, and the average of all those correlation coefficients is the Cronbach’s alpha coefficient (Wu et al., 2016).

While reliability is vital, it is not sufficient without validity. Validity assesses how adequately the test measures the intended latent trait. Imagine throwing darts. It is not enough for darts to land within centimeters of each other if the darts land far from the target. In psychometrics, darts landing close to each other are akin to reliability, while landing on the target represents validity; both are needed to succeed. Like reliability, validity exists on a spectrum of high and low. Unlike reliability, validity is determined more by evaluative judgments rather than calculated values. According to Miller et al. (2013), validity is evaluated based on the consideration of content, construct, criterion, and consequences.

A common misconception among researchers is that IRT and CTT are interchangeable, when they actually “provide complementary results” (Wu et al., 2016, p. 74). While CTT focuses on the reliability of the results, IRT focuses on the relationship between the items and the latent trait. With the knowledge of the fundamentals, these differences can be explored in some depth.

The foundation of CTT is that the observed score from the instrument, that measures the latent trait, is made up of a respondent’s true score and random errors. Written as an equation, that is:

where X is the observed score, T is the true score, and E represents random error. Random error refers to controllable errors and errors due to chance. Since the true score will always be unknown, instruments can only estimate true scores, and the accuracy of the estimates can be evaluated using reliability measures.

Recall that instruments are made up of indicator variables. Because the relevance and priority of indicator variables can be subjective, IRT and factor analysis are used to quantify each indicator’s contribution. These methods of analysis are closely related to each other. In fact, some researchers consider IRT a subcategory of factor analysis while others see them as two separate forms of analysis that merely intersect like a Venn diagram. Focusing on the Venn diagram analogy, the two methods intersect in their purpose, but what falls outside the intersection (i.e., their differences) is in their calculations and data restrictions (Jones & Thissen, 2007; Groenen & van der Ark, 2006).

The complexity of the calculations is beyond the scope of this chapter; however, an overview is that IRT calculations are based on probabilities, whereas factor analysis calculations are based on covariance, or a measurement of how much the items are related to each other (Jones & Thissen, 2007; Wang & Wang, 2012). Factor analysis and IRT also differ in the type of data that can be used. Notice that the questions in the musicality model have different answer options.