Edgar Dale and the Cone of Experience

The following chapter was based on the following article, previously published in Educational Technology.

How can teachers use audiovisual materials to promote learning that persists? How can audiovisual materials enable students to enjoy learning through vicarious experience? These were two of the many important research and development questions addressed by an extraordinary educational technology pioneer, Edgar Dale. Although he is perhaps best remembered today for his often misinterpreted “Cone of Experience,” Dale made significant contributions in many areas as evidenced by just a few of the titles of the many books he wrote during his long lifespan (1900-1988), including: How to Appreciate Motion Pictures (1933), Teaching with Motion Pictures (1937), How to Read a Newspaper (1941), Audiovisual Methods in Teaching (1946, 1954, 1969), Techniques of Teaching Vocabulary(1971), Building a Learning Environment (1972), The Living Word Vocabulary: The Words We Know (1976), and The Educator’s Quotebook (1984).

Born in 1900 at the dawn of a new millennium, Edgar Dale’s work continues to influence educational technologists in the 21st Century. Dale grew up on a North Dakota farm, and according to Wagner (1970), he retained the no-nonsense thinking habits and strong work ethic of his Scandinavian forebears throughout his illustrious career. While working on the family farm and later as a teacher in a small rural school, Dale earned both his Bachelors and Masters degrees from the University of North Dakota partially through correspondence courses.

In 1929, he completed a Ph.D. at the University of Chicago, and then joined the Eastman Kodak Company where he collaborated on some of the earliest studies of learning from film. Interestingly, although many of these early studies were experimental ones designed to compare learning from film with other media, Dale later expressed distain for such studies. According to De Vaney and Butler (1996):

When Dale was asked why he did not do experimental research in which a scholar attempted to prove over and over that students learn from radio or film, he replied: “It always bothers me, because anybody knows that we learn from these things (media). There’s no issue about that. . . . Well I suppose in any field, to be respectable you have to do a certain kind of research. (p. 17)

In addition to his own prolific scholarship, Edgar Dale mentored an outstanding cadre of doctoral students during his long role as a professor at Ohio State University (1929-1973), including Jeanne Chall and James Finn. Dale also served as President of the Division of Visual Instruction (DVI) of the National Education Association (NEA) from 1937-38, the professional association that is now known as the Association for Educational Communications and Technology (AECT).

Although he traced his ideas back as far as Pestalozzi (1746 – 1827), who pioneered the concept of learning through activity, and Froebel (1782 – 1852), who first promoted the principle that children have unique needs and capabilities, Edgar Dale’s work was most heavily influenced by John Dewey (1859-1952). Dewey stressed the importance of the continuity of learning experiences from schools into the real world and argued for a greater focus on higher order outcomes and meaningful learning.

In his first edition of Audiovisual Methods in Teaching (1946), Dale expanded Dewey’s concept of the continuity of learning through experience by developing the “Cone of Experience” which relates a concrete to abstract continuum to audiovisual media options (Seels, 1997). Dale (1969) regarded the Cone as a “visual analogy” (p. 108) to show the progression of learning experiences from the concrete to the abstract (see Figure 1) rather than as a prescription for instruction with media. In the last edition of Audiovisual Methods in Teaching (1969), Dale integrated Bruner’s (1966) three modes of learning into the Cone by categorizing learning experiences into three modes: enactive (i.e., learning by doing), iconic (i.e., learning through observation), and symbolic experience (i.e., learning through abstraction). 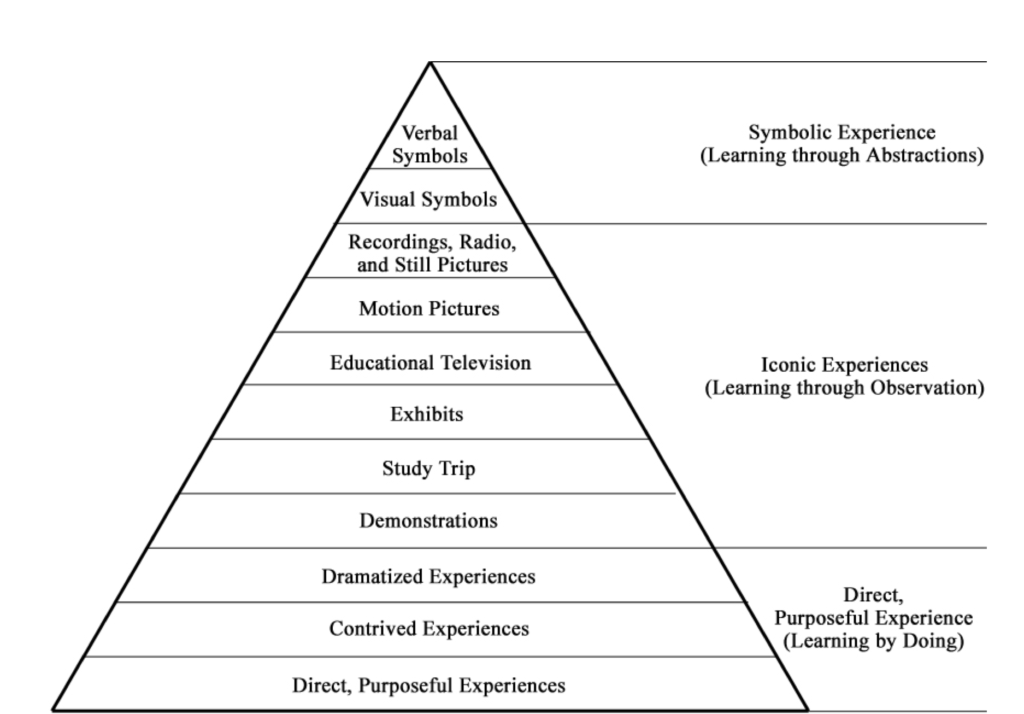 In moving toward the pinnacle of the Cone from direct, purposeful experiences to verbal symbols, the degree of abstraction gradually increases. As a result, learners become spectators rather than participants (Seels, 1997). The bottom of the Cone represented “purposeful experience that is seen, handled, tasted, touched, felt, and smelled” (Dale, 1954, p. 42). By contrast, at the top of the Cone, verbal symbols (i.e., words) and messages are highly abstract. They do not have physical resemblance to the objects or ideas. As Dale (1969) wrote, “The word horse as we write it does not look like a horse or sound like a horse or feel like a horse” (p. 127).

Dale (1969) explained that the broad base of the cone illustrated the importance of direct experience for effective communication and learning. Especially for young children, real and concrete experiences are necessary to provide the foundation of their permanent learning. The historical importance of Dale’s Cone rests in its attempt to relate media to psychological theory (Seels, 1997) and the Cone has shaped various sets of media selection guidelines ever since. For example, influenced by Dale, Briggs (1972) delineated general principles for media selection according to the age of learners, the type of learners, and the type of task. 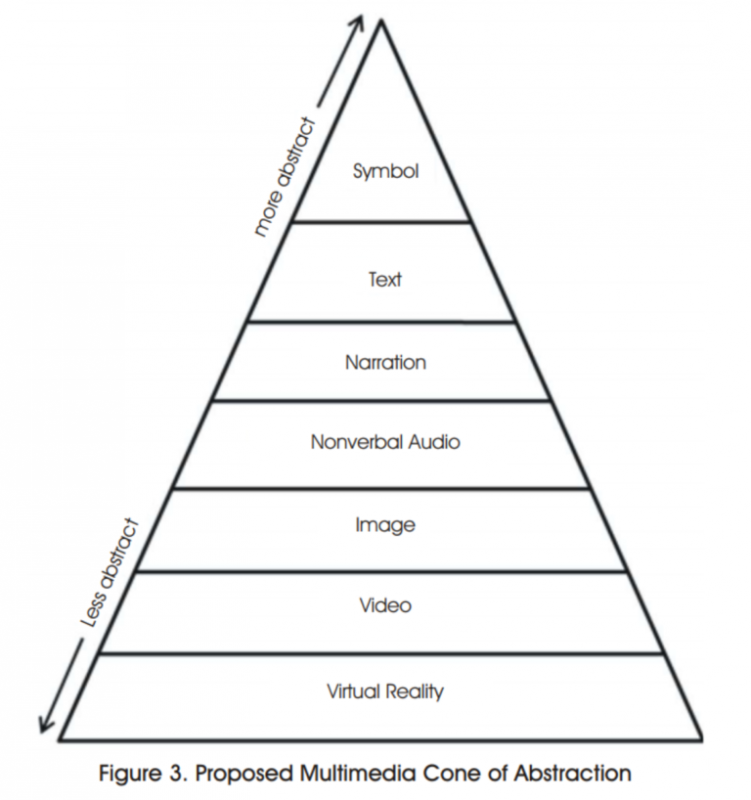 In addition to this confusion, the implications of Dale’s Cone have been misunderstood or misapplied. For example, Dale’s Cone has been used to maintain that more realistic and direct experience is always better. However, Dale (1969) demurred, writing that, “Too much reliance on concrete experience may actually obstruct the process of meaningful generalization” (p. 130). Also, Dale noted that providing realistic learning experiences may not be efficient in terms of cost, time, and efforts. Instead, Dale suggested that teachers should balance combinations of concrete and abstract learning experiences.

For a thorough analysis of the prevalence of the “Remembering Cone” myth in instructional design, along with analysis tracing the history of this myth and the evidence against it, see the final issue in 2014 of Educational Technology, which presented a special issue on the topic.

While learning by doing (direct, purposeful experience) may be better than learning through abstraction (symbolic experience), explain why you think Dale (1969) felt that “Too much reliance on concrete experience may actually obstruct the process of meaningful generalization.”

In another book Can You Give The Public What It Wants (1967), Dale reiterated Dewey’s influence on his ideas by writing: “As I return to Democracy and Education [published by Dewey in 1916] I always find a new idea that I had not seen or adequately grasped before” (p. 186). Dale (1969) described learning as a “fourfold organic process” (p. 42) which consisted of needs, experiences, incorporation of the experiences, and the use of them. To promote permanent learning, Dale asserted that teachers should help students identify their needs for learning and set clearly defined learning goals related to their needs. A learning experience must be personally meaningful with respect to students’ backgrounds and developmental stages and the nature of the experience should be logically arranged to help students incorporate new knowledge with what they already have. Later, students should have opportunities to practice and try out their new knowledge in real life as well as in learning contexts. Dale (1972) wrote:

To experience an event is to live through it, to participate in it, to incorporate it, and to continue to use it. To experience is to test, to try out. It means to be a concerned participant, not a half-attentive observer. (p. 4)

Thus, effective learning environments should be filled with rich and memorable experiences where students can see, hear, taste, touch, and try. Dale (1969) articulated the characteristics of rich experiences. In a rich experience:

In Dale’s perspective (1972), most students in schools did not learn how to think, discover, and solve real problems. Rather, students were forced to memorize facts and knowledge in most schools, and as a result, any knowledge they acquired was inert in their real lives. For this reason, he argued that we should have revolutionary approaches to improve the quality of educational learning environments. To build learning environments infused with rich experiences, Dale argued for the development of new materials and methods of instruction. Dale promoted the potential of audiovisual materials, believing that they could provide vivid and memorable experiences and extend them regardless of the limitations of time and space. Dale (1969) argued:

Thus, through the skillful use of radio, audio recording, television, video recording, painting, line drawing, motion picture, photograph, model, exhibit, poster, we can bring the world to the classroom. We can make the past come alive either by reconstructing it or by using records of the past. (p. 23)

Although as noted above, Dale (1969) did not advocate comparative media studies, he did recommend evaluating combinations of media and instructional materials in actual learning environments. Amazingly, Dale anticipated the direction of media research as if he had been privy to the Great Media Debate between Clark (1994) and Kozma (1994). Dale (1969) provided an analogy:

As we think about freight cars and their contents we can and do distinguish them. But the vehicle and its contents are closely linked. The gondola car is linked with coal: we do not haul oil in it. The piggy-back conveyances for transporting automobiles are not used to transport wheat. In all communicating of messages, therefore, we must consider the kind of vehicle used to transport them, realizing that medium-message characteristics will influence what can be “sent” to a receiver. (p. 133)

Dale recommended that researchers should look at the effects of combinations of media in the environment where they will be used rather than the testing of a single, isolated medium in the laboratory. By conducting research in real classrooms, the varied combinations of possible factors such as attributes of audiovisual materials, how to use and administer them, learners’ characteristics, and learning environments could be examined because learning occurs through dynamic interaction among the learner, the context, and the media. Although the experimental methods of educational and psychological research were focused on testing the tenets of behaviorism and pitting one media against another throughout most of his career, Dale was prescient in his recognition that the complexities of learning render most such studies fruitless.

Dale was much more than a scholar isolated in the ivory towers of academe. As described by Wagner (1970), “He actively fought for better schools, academic freedom, civil rights, and other causes long before these became popular issues” (p. 94). Dale also anticipated the still-neglected importance of media education by promoting in the 1930s the then radical notion that teachers should help their students to understand the effects of media on them, their parents, and society, and to learn how to critically evaluate the contents of the radio, newspapers, and films. Dale was a socially responsible researcher, a thoughtful humanist, and dedicated educator. Any educational technologist seeking inspiration for their work in our field would find no better role model than Edgar Dale.

Briggs, L. J. (1972). Students’ guide to handbook of procedures for the design of instruction. Pittsburgh, PA: American Institutes for Research.

Dale, E. (1967). Can you give the public what it wants? New York: World Book Encyclopedia and Cowles Education Corporation.

Seels, B. (1997). The relationship of media and ISD theory: The unrealized promise of Dale’s Cone of Experience. (ERIC Document Reproduction Service No. ED 409 869). Retrieved October 23, 2006, from http://eric.ed.gov/ERICWebPortal/Home.portal

Please complete this short survey to provide feedback on this chapter: http://bit.ly/ConeExperience